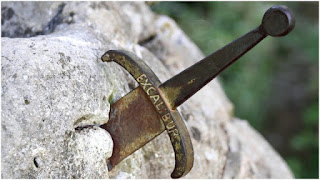 THE QUESTION HATH BEEN RAISED!  The answer shall be found.  Hopefully.

As anyone familiar with my blogging, my tweets, or my videos will know: I am mostly an amalgamation of a ton of incomplete thoughts.  Occasionally, those thoughts find something that makes sense, then they spit it out for others to see it and revise as needed.  Here's what I've got for magic items right now.

Perhaps the characters are delving into the tombs of a long dead and despised pharaoh.  Buried with his riches by a populace terrified of his curse, the architect of the crypt who knew how to avoid the traps is long dead kind of thing.  Perhaps the riches are the goal or the vanquishing of the ancient evil stirring within.  But the group sees an all-too-easily accessed jeweled scimitar in the hands of a stone statue beside the pharaoh's sarcophagus.  Perhaps a historian could reveal that the statue is of the pharaoh's sworn guardian who was thought to be immortal.  Immediately, the players are going to think "that thing is probably a trap. Maybe it awakens all of the stone statues in this place and we're going to be overwhelmed.  Maybe there's some horrific curse on it.  Either way, we might be fucked if we grab this thing.  Or we might have a powerful weapon."

That dilemma is an interesting component that is introduced that's not unlike the pulling of a mysterious lever, but with the added potential for more shenanigans.  A benefit that they can take with them that's sitting right in front of them, daring to be utilized.

Let's say they decide to take it.  Do they grab it bare handed, or do they handle it in layers of cloth to avoid direct touch? Do they can either identify it or pay some poor mook to handle it for them and see what happens?

Let's say they just grab the thing.  The wielder now has a +2 magic sword with a hatred for traitors that allows it to sap the life right out of them (2d4 HP drain, let's say), but has a temporary curse that fills the wielder with the will of the guardian.  The guardian demands that the intruders surrender their earnings and leave the tomb. The wielder must pass a Save vs. Magic or be taken over for 10 minutes, at which point, the wielder will attack anyone holding a belonging of the pharaoh's.  They repeat the saving throw every ten minutes, and after 24 hours, the curse goes away.

The players don't know how long this will last.  All they know is that their friend is compromised and is threatening to kill them if they don't hand over the goods and leave.  This adds even more uncertainty.  Should they kill the wielder?  Should they cast Sleep on them and bind them up?  Will they have to get this curse lifted by a Cleric or through some kind of purification ritual?  Uncertainty raises tension.  At the end of the day, the players end up with a powerful magic weapon that has personality and a history.  That's cool.

The second thing that magic items offer is a manner by which the players can creatively deal with problems that are in front of them.  Perhaps you draw your Frostbrand to snuff out all the nearby lights as you burst into a room, your darkvision giving you an edge over your human prey.  Perhaps you use your portable hole to breach the wall of an otherwise impregnable fortress.  Perhaps you use a bottomless vessel of water to drown kobolds hiding in a pit that are terrorizing the local population.  Maybe you've been tossed off a cliff, so you grab an Immovable Rod from your bag and continuously reactivate it to slow your descent and safely land on the bottom.
The more bizarre the magic item, the more interesting it'll be when your players find a creative use for them.

The third thing that comes to mind is when you have magical items that have a particular significance to the world around the PCs.  This can obviously be achieved with mundane items, but adding a magical quality to it adds levity to the notion that these things are indeed mystical.  Think of Excalibur, for instance.  Think of various items of myth and legend that belonged to great rulers or merciless warriors.  For NPCs to recognize, acknowledge, and covet these items makes the players prize them even more.  Perhaps bearing the shield of Aelon the Conqueror makes you the rightful heir to his ancestral house, guarded by legions of moss-covered undead who wait for the return of its bearer to go to rest.  Maybe the sword you find has a prophecy of ushering in a new era of bloodshed, murder, and darkness, and those who recognize it wish to relieve you of it and send it to the depths of the ocean.

And in a system like Fifth Edition where magic is all over the place, your casters can throw cantrips around all day and night, ye old "well it's a +0 or greater so you can ACTUALLY hurt this creature!" isn't a trope you can rely on to make a magic item stand out.

April 03, 2020
If you've watched Critical Role or any of the other major Live Stream D&D Fifth Edition games, you gather a particular impression of what Dungeons and Dragons, at its core, is supposed to be.  Wizards of the Coast's marketing team spends plenty of time pushing this idea.  "Collaborative Storytelling" is what they call it.  "You tell stories together as a group, playing exotic characters in magical, fantastical worlds." It sounds accessible and highly appealing to many, but when you put the idea into practice, you're often left with disparate approaches to playing the game that are eternally in conflict.

While there are often mixtures of each approach in any Tabletop Roleplaying Game group, players will often emphasize some more than others, causing the desire to branch off into separate groups or playing separate systems.  This is a natural impulse.  Part of Fifth Edition's overwhelming success is how it melds all three approaches together, faci…
7 comments
Read more

April 21, 2020
Lamentations of the Flame Princess is struggling. There appear to be many contributing factors, some likely due to the consumer base losing steam, but a fair amount stemming from a willful injection of anti-Lamentations hysteria. For the latter reason, I believe it's worth evaluating just what people are opposing here.
It all started with that damned picture. He posed for a picture with Jordan B. Peterson. Normal people will ask one of the two following questions:  1. So what? 2. Who is Jordan B Peterson? Jordan Peterson is a clinical psychologist from the University of Toronto. With regard to Jim's life, Peterson wrote a self-help book (called 12 Rules For Life) that encourages you to make positive changes that have rippling effects on personal growth.
So what's the big deal? Peterson is also a figure who presents himself as a canary in the coal mine (not unlike most conspiracy theorists) with regard to Cultural Marxist influences in Academia. His influence grew exponentially …
3 comments
Read more

May 12, 2020
Part One: My Trek to the OSR. (Skip to Part Two if you'd rather just talk shop)
When I first joined the RPG hobby, I was enamored by system complexity. I'm not like many in the OSR who come from a background of long nights with D&D in their youth, experiencing the rollercoaster of developments in the system through the years. I grew up on Final Fantasy, Dragon Quest, Star Wars (not the prequels, mind you), Stargate, and a scant few fantasy novels that I'd sneak in from time to time.
By the time I entered the Tabletop Role-playing scene, customization was all the rage.  My experience growing up with MMORPGs and JRPGs made me a perfect candidate for the build-obsessed WotC era D&D player. I spent hours upon hours engaging in whiteroom theory crafting exercises, trying to eke out the highest maximum benefits for games that hadn't even started yet. Compared to the peak of 3.5e (which I probably would have adored were it my first introduction), Fifth Edition's cus…
Post a Comment
Read more